Why the DSCC Loves Sarah Palin 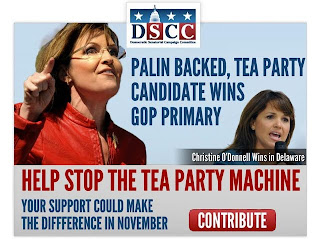 This is from Shannyn Moore and AKM (Mudflats) They are asking us all to share this and if we can to donate to Scott McAdams. Please do what you can.. This is a Senate seat we can win... and we need all the seats we can get.

They’ve had weeks to help secure a now open seat they didn’t think they had a prayer to take. Why aren’t they fighting for Alaska? Lisa Murkowski asked McAdams where his DSCC support was. When it didn’t show, she threw back in as a write-in candidate.

The front page of their website features a picture of Sarah Palin. Fear of her brand of crazy has been an ATM for the DSCC. They’ve raised millions off of Palin word salads with guano dressing. The DSCC website also has a link to Palin’s anointed Alaskan proxy for US Senate, Joe Miller, but they haven’t supported his opponent.

Alaska is the cheapest place in the country to run a campaign. One hundred dollars of campaign money in such a small market is equivalent to $2,000 for a race in Texas. With Palin’s negative numbers over 50%, her candidate, Joe Miller, is vulnerable. The Tea Party is recruiting people with “Lisa M” type names to run a write-in, and every Murkowski vote will be challenged by their attorneys. It will make the Franken/Coleman recount look like play-dough hour in kindergarten.

Nationally, both Democrats and Republicans are underestimating Sarah Palin. The DSCC and others do this at their own peril. There is a chance to drive a political stake through the heart of the Palin king-maker meme. I realize Palin is a money maker, but neutering her politically by electing a Democratic Senator in Alaska is priceless.

Call the DSCC and ask them to FINANCIALLY support Alaska’s democratic candidate. 202-224-2447 Email them at info@dscc.org.

Please take a minute and show your support for a good Democratic candidate. So far the DSCC is NOT giving him any financial support. We can win this seat if we can help him. Even if you can't donate, at least send an email or make a phone call to the DSCC... They send us emails all the time asking for money. But are not using it in markets where it can make a huge difference.

I will definitly send an email, you're right this is so important! No state should be ignored by the dems!

No they shouldn't I was glad they let us know.. please put this up at your place Sue.. so we can get the word out.

Thanks for posting and by all means will email. Would contribute but am in need of my own charity drive.

I know what you mean Leslie.. but emails are great..from what I read on the comments @Mudflats and @Huff Post they are getting inundated with calls and emails and are logging them... We may get something done.