Frank Schaeffer Calls out the Right and the Left

I think it is time we all, and I do mean ALL of us paid a little attention to what he is saying. After the breach at the White House the other night.. it is getting very serious out there.

People are calling for outright WAR against this President... and we have people on the Left side of politics criticizing him almost as much as ones on the right, if not more. Because they don't think he is moving fast enough, or he isn't doing what they want as they think he should.

There is a billboard up not far from my house calling for an armed revolution against the "Government". It has the quote on it... "Live Free or Die". If I can get a picture I will... but it is hard when it is on Interstate 70 in a pretty high traffic area.

I may not agree with everything the President says or does.. but to rail against him publicly is to align yourself with the RWNJ's. Is that what you want? Because that's what I think when I read your postings and stuff... Just think about it with an open mind and see what you think. No I am not saying you have to be all love and roses all the time... but temper your thoughts a little. Don't be so negative and critical.

Pardoning of the Turkey

I missed this when it happened.. since I was at the hospital and just got to watch it now.. I love our President's sense of humor... he is funny, wise and laughs at his own jokes and loves to tease his girls.

If you missed this, here is the official pardoning of the "Bird" for Thanksgiving this year and now it is off to Disneyland to live forever....lol

On This Thanksgiving: Family, Turkey ... and a Weekly Address

Given the holiday, we are releasing the President's weekly address today. In this video, President Obama calls to our attention the men and women in uniform who are away from home sacrificing time with family to protect our safety and freedom. He also talks about the progress of health care reform, the Recovery Act, and job creation to ensure that next Thanksgiving will be a brighter day.


Things are still a little hectic around my household, but I still have much to be Thankful for. I hope we all take a moment and say Thank You, to our Military, to our President and to the members of Congress who are brave enough to stand tall for us and do what needs to be done to move this country forward.

There is much, much more to be Thankful for, family, friends and the love they give us every day. The comfort and the thoughts that are sent your way when you need them most.

March on Washington to Show the Teabaggers what Support Looks Like

On January 15, 2010 there is a movement in the works to march on Washington, DC and show the Teabaggers what real support looks like.

This is in support of our President and the Democratic Congress. To show them we are behind them, to show them we want reform, we want a green economy, we want everything we were promised and we supported from our Congress and the President.

This video explains it all, they have a Facebook group you can join. Which is here at Facebook .


This is a wonderful idea and I hope we can get a huge crowd together.. If we can get more people to show up and get the attention of the national press, maybe we can prove that we, as progressives are stronger and make more sense than any Teabagger out there.

Please take this video and share it and post it so we can get the word out.. Let's try to get as many people informed about this as we can and hopefully we can get a huge crowd there for this event. Maybe some of us who couldn't be there for the inauguration can be there for the 1 year celebration of it.

President's Weekly Address: Traveling Abroad for Our Economy at Home

This week the President comes to us from South Korea. He is on his first trip to Asia as President.

In an address recorded in Seoul, South Korea, the President discusses his trip to Asia. He talks about his push to stop nuclear proliferation in North Korea, Iran, and around the world. He talks about promoting America's principles for an open society in China while making progress on joint efforts to combat climate change. And talks in-depth about the primary objective of his trip: engaging in new markets that hold tremendous potential to spur job creation here at home.


We do have to be patient. I know there are some who will never give this president and the economy a break for any thing, but we have to allow him time to work and time for the recovery to work as it was planned.

I am sorry this is late again this week. I have just been overwhelmed with troubles. First, is my mom, you all know about her... then my 84 year old uncle who I help take care of fell last Saturday morning and I have been at the hospital with him ever day.. He has broken his left hip and we finally managed to get it fixed Wed. They did a partial replacement.

Then a very dear cousin of mine was in a serious car accident. They have done as much repair as they can do to her left foot and legs.. it is touch and go on her left foot as to whether she will be able to keep it.

Then my daughter's father is very ill and they are giving him a 50/50 chance of making it.

So as you see I have had a terrible week. Today hasn't been much better but at least I finally got some rest today.

My uncle will be getting out of the hospital probably Monday or Tuesday, and going to a Skilled Nursing Facility for rehab and PT... Hopefully that will help as it will be much closer to home and I will be able to pop in and out multiple times a day.

Thanks for understanding and for being such loyal readers.

The President looks back at a week where we honored those who serve on Veterans Day, and mourned those we lost at Fort Hood. He discusses the review he has ordered into the Fort Hood incident, and pledges to stand by our servicemen and women, as well as our veterans, as his most profound responsibility.

Labels: Fort Hood tragedy, Honoring our Military and our Veterans, Our Commander in Chief, The President's Weekly Address, Veterans Day

Happy Veteran's Day to All Who Served and Sacrificed 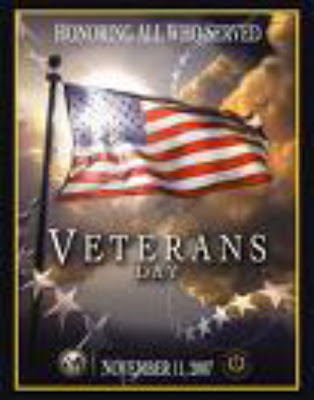 It doesn't matter which war or non war you fought and served in.. if you are a veteran of any branch of the service, of any year, my hat is tipped and my hand salutes you. I thank you for your service, your sacrifice and the sacrifice of your family and thank them and you for giving you and your time and sharing you with your country and with us.

You have gone above and beyond anything anyone ever expected you to do, and NOTHING we can ever do or say is enough to thank you for what you gave us. We owe you so much.

I have no words to say about this. I believe our President says it all very clearly and very plainly himself.

I am not meaning to take anything away from what the President is saying, however RealityZone left me a comment the other day and said we should all read this article to possibly help us understand the man who did this tragic shooting. After looking at it I agree with him. You should check out his blog when you get a chance too.

I am going to post just the web page and you can go there and read it if you would like. It is called, Word gets around: Twilight and the trick of the psychopaths and if you click on the title it will take you to the site where you can read all about it.

Thanks RZ for pointing this out to me and everyone.

He has also given me some great info on more Wind Energy posts and I have got to get them posted..

I promise I will get them done in the next day or so.
Posted by Annette at 11:39 PM No comments:

The President condemns the "despicable" attacks at Fort Hood, honoring those who were killed and injured. He also commends those who stood up to help and console those affected: "even as we saw the worst of human nature on full display, we also saw the best of America."

This was a terrible tragedy, yet as the President said we did see the worst and the best of our people as it seems we always do. Even as one person was trying to take so many lives there were others who were working to stop him and help the wounded in any way they could. That's the America I know and love, color, race, sex, nor any differences means nothing, we are all American's and we all are in need and we work together to help each other... That's what the Republican's seem to forget.

Here is the President.

Sorry I am late posting this, Mom had surgery on her shoulder yesterday and she is in a lot of pain.. it's been hard on all of us dealing with it and her.. She is very resistant to calling the doctor and getting any other help.. but I think that is the next step. Prayers and thoughts would be most welcome.
Posted by Annette at 10:22 AM 7 comments: