Update On My Uncle and the State of Our HealthCare System 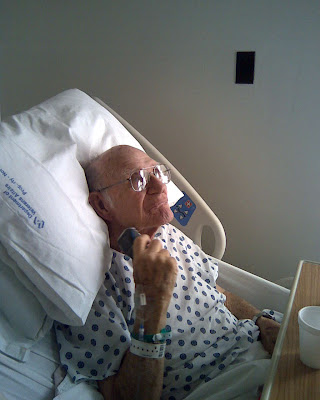 I guess you may have figured out by now things have approved around my house.

My uncle is home with me, so that allows me much more free time. It has been a rough month for him and anyone who thinks we have the best health care in the world.. has NEVER had to spend any time in the hospital or a nursing home.

He was in the VA hospital in Kansas City and for the most part things were fine. He developed a Urinary Tract Infection within 36 hours of admittance, most likely because he had a catheter.. which is almost normal for men it seems.

Finally, on the 18th, after 4 days, they did surgery to fix his hip. Of course they had tested him and found he had MRSA in his nasal hairs.. or Nares as they call it.. so we had to change rooms, then we had to move to Progressive Care because they thought he had a heart problem..

So, 3 room changes, 2 infections and a heart problem all developed while he was in the hospital. And this was in 4 days... lol So far the nurses were great. But I had problems with the Doctors from the moment we got to the ER and had to have words with 2 of them right away.

The ortho on call Saturday when we got there had an attitude and decided she didn't need to be bothered so early in the morning and expressed her displeasure, so she heard an earful over the phone from me.. Then an arrogant young resident who decided to stick his nose into the mix in the ER and made a very ignorant comment about it got my full wrath directed at him face to face.. Needless to say, he learned you don't mess with my family.

After the Orthopedic Surgeon heard about it.. things got a little more heated and the two doctors apologized to me for ever stepping out of bounds.

Now, I am not saying it was all the hospital's fault he developed the infections.. any of us may have the MRSA of the Nares.. that is very likely.

However, after surgery he was in PCU again and then he develops pneumonia..I feel mostly because they didn't turn him or get him up like I was taught when I worked in the hospital 40 years ago. I was just amazed they didn't.

They depended on the bed, which has an air mattress to move him enough to keep him from getting ill. Well it didn't work.

But the topper of them all.. after 2 weeks..was when a nurse came into the room with 3 syringes to give him insulin.. She couldn't get his band to scan and therefore it was showing her there was something wrong. Not only that, when I asked her what it was for and she told me, I explained to her it was too much and that she should check the dosage and verify it again. She refused to take the time and said it was what the doctor ordered. Next thing I know she popped 55 units of Lantis and 40 units of Aspartane into my uncles arm.. Normally he only takes 2 to 5 units of Aspartane. That's all.. nothing else.. and he hasn't taken that for 2 years.

Yeah, you got it.. his blood sugar went to nothing.. in about an hour he was almost in a diabetic coma. I thought I was losing him and it was the fault of a nurse who wasn't doing her job correctly. Not the system, but a nurse.

Between me and another nurse working on the floor and an aide or Med Tech as they call them now, we brought him out of it. The nurse who was assigned to my uncle that night was more concerned with the football game between Kansas University and Missouri University than she was what was going on with her patients and couldn't be bothered to do her job correctly.

She didn't follow 2 of the most important procedures in the hospital, # 1 verifying the dosage and patient identification, and # 2 listening to the patients family. Yes, she has been reported and yes, she is probably going to lose her job.

It was only 2 days after that, he was dismissed from the hospital and sent to rehab to concentrate on PT and strengthening him so I could bring him home. Well that didn't work. One of the problems I had with them was they didn't make sure he was eating. A diabetic has to eat. When I picked him up on Wednesday his blood sugar was 50, yes, you read that correctly.

He regressed so badly in the rehab, that from walking in the hospital almost unassisted, he ended up not being able to walk even short distances in the rehab. The Social Service Director at the Rehab facility told me on Tuesday she believed he was ready to come home if the doctor okayed it. So, we had an appointment on Wednesday with his surgeon and I asked him.. he was a little confused, because he stated, "Usually it is up to the Rehab, not me.. but I am okay with him going home".

Well, when we got back to the SNF, my uncle didn't want to get out of the van...lol It took a lot of talking to get him to stay one more night.

So, Thursday, Dec. 10th, I went back, picked him up and brought him home. He has improved 250% since then. In fact I have threatened to tie him down so he will stay in bed, stay in the chair and quit walking around without me being there to help him. LOL

Remember, my uncle is 84 years old. He ended up with a partial hip replacement. They replaced the ball on his left femur to fix the broken hip joint. This happened on Nov. 14th and this is his story.

I am so proud of him for coming so far, and not giving up with everything he went through. This doesn't even begin to describe the horror, the pain, the fear, the emotions we have been through during this month. I have spent many hours at his bedside because I was literally scared to death to leave him for fear something would happen while I wasn't watching over him.

That's not a joke, it is not an exaggeration, it is deadly serious. There are so many errors made in hospitals and nursing homes every day. Here is a picture of his foot and ankle, where an aide said she couldn't get his sock off his foot so she just left it bunched around his swollen ankle. When I found it, I showed it to the nurse, who in turn showed it to the director of nursing. I was assured this would not happen again. Yet it did, just a day later. 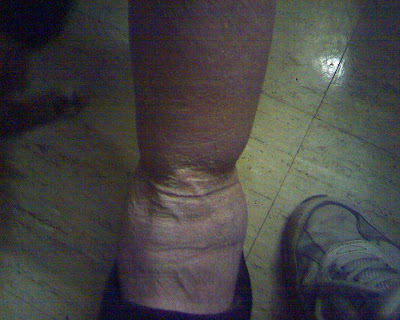 I hope you can see the picture ok.. all I had with me was my cheap cell phone...lol it doesn't do a bad job but sometimes the pictures come out pretty dark.

Anyway.. I just wanted to update you all as to how things are going. Mom is doing well also. Thankfully she didn't have the problems Uncle did. But then Mom wasn't an inpatient, she had her surgery and came home. But we did have to take her to the ER for follow up pain control. So, she did have her problems.

My cousin is in rehab now too, not the one Uncle was in...lol Hopefully she will do well. They are saying she will be there for maybe a month or more, but at least they didn't have to take her foot, they did manage to save it. That was a huge relief.

Thank you all for your concern, your thoughts and your prayers for my family and I during this difficult time. We have the Visiting Nurses coming in along with PT and a bath aide to help me with my uncle. That all helps me a lot. And just having him here is a huge help, I am not on the road 2 hours a day and not worrying about what is going to happen next.. now if something goes wrong, it is MY FAULT...lol

Thanks again everyone. You are so special and mean a lot to me.
Posted by Annette at 2:03 PM

I'm going to leave this and then come back asap.
This is Lieberman's email address.

Tell him what you think. Post on your blog and in comments on other blogs. Ask others to do likewise. We may not have money but we can get numbers.

Thanks Leslie.. I am sending an email NOW.

Sometimes when the URL is so long, you have to cut off all but the part that ends with the gov, com, org, or what have you.

What a nightmare for both of you. It's exhausting emotionally and physically. But the worst seems to be over and hopelly you are both getting some rest. I don't have a lot of patience with that kind of thing.

Men aren't the only ones to get UTIs from a catheter. They just need to be pulled out as soon as possible. Take care and my best to both of you.

That is quite a story. I'm glad things are better. Just imagine if you hadn't been there.

Annette,
I'm so sorry your uncle and your family are going thru this. We have had family medical issues along these lines in the past, fortunately things have been on an even keel lately.

Stay tough,stay strong,stay the good hearted person you are. Try to put your cares to God, easy for me to say I know.

Sounds like you're up to the struggle, as up as any of us can be. Good luck, God bless.