Report by CBO Shows The Recovery Act Reduced the Deficit

I found the link to this report on BobCesca.com and had to share the report and some of the information with you.

This report was written by Economists Alan Blinder and Mark Zandi and published by the CBO. This chart shows what the deficit would be without the Recovery Act and how it is WITH the Recovery Act. 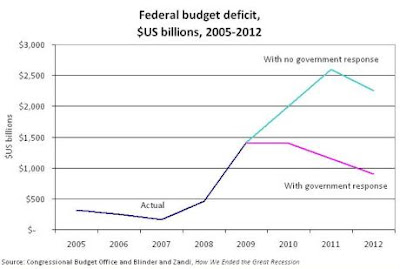 From the Wonk Room at Think Progress comes this:

Their conclusion is that had the combined financial and fiscal policies not been enacted, “GDP in 2010 would be about 6.5 percent lower, payroll employment would be less by some 8.5 million jobs, and the nation would be experiencing deflation.”

Blinder and Zandi break out their estimates separately for the financial policies and the fiscal policies. They estimate that the American Recovery and Reinvestment Act and other fiscal policies have saved or created 2.7 million jobs and without them, unemployment would stand at 11 percent and job losses would have totaled 10 million. On top of this, they estimate that if nothing had been done to address the financial crisis — no Troubled Asset Relief Program, no bailout of American International Group Inc, and no investment in the auto industry — our economy would have 5 million fewer jobs than we do today and unemployment would be sharply higher, at 12.5 percent.

However, one tidbit in the report that has received little notice is that by acting, Congress actually reduced our potential deficit problem. Given the policy steps taken, Blinder and Zandi estimate that by the end of the 2010 fiscal year, the federal budget deficit will be $1.4 trillion and it will fall to $1.15 trillion in fiscal year 2011 and $900 billion in fiscal year 2012.

The bolding is mine... because I wanted to make sure you saw it. For some reason all these so called Deficit Hawks are ignoring this in their reports and talking. Here is more:

Once again bolding is mine. This is something we should be shouting from the rooftops and lording over the GOPers who are claiming now to want to reduce the deficit. A deficit that is largely due to their policies and the spending that went on during the years of 2001 and 2006 especially and to a smaller extent from 2006 to 2008. 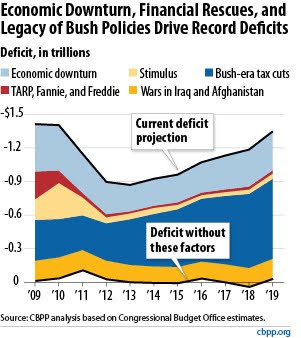 As is shown by this chart the Bush Tax Cuts and the downturn of the economy added much more to the deficit than anything President Obama and the current Congress has done.

If you want to read the entire article from the Wonk Room, just give it a click.

We need to get this out and let people know the TRUTH about what is going on with the Finances of our Country. I have not seen this on any media outlet and I know it will never get much play if any on Faux Noise, because it tells the truth.

I hope you read the report and post these charts so everyone can see them... Please feel free to take anything you want... Linky love if you can, but is not necessary. I just want everyone, including some of the RWNJ's out there to see these and try to explain how the GOPers are going to fix this.
.
Posted by Annette at 10:53 AM

I have seen these Annette. I just wish the people would realize you can't possibly pull out of such a deep recession as we were in in a year or 2! What is wrong with peoples thinking?? The recovery is slow yes, but at least it's going in the RIGHT direction!! The charts PROVE democrats KNOW what they are doing, I wish the voters would wake up and smell the coffee!

Yes, I agree Sue, they need to smell the coffee instead of drinking the "tea"....lol

I imagine a lot have seen this but I wanted to highlight it again... I don't think we can talk about it enough.

These morons are just that - morons. They think the CBO is a tool of the socialists which control the Democrats. Seriously.

Yes, they only like to quote the CBO when they think it is saying what they want to hear... other times it is a left leaning organization. lol