The Dumbing Down of America

I know I have talked about this before, but it has never been more evident to me than it is now. Just in the last few days, seeing the Town Hall events our Senators and Representatives are holding around the country.

On Hardball last night, Lawrence O'Donnell was sitting in for Tweety, which let me make a disclaimer here..is the ONLY reason I watched it.. lol.. and he featured Katy Abram from Sen. Arlen Spector's Town Hall in Lebonan, PA. Now I have to give her credit for coming on the show. But, again, I think that shows how truly uninformed people are, and how dumb we have gotten.

She is such a low information person she couldn't even carry on a decent conversation with Lawrence really. She claimed to have no clue how much money her and her husband made in their small business and whether they would be subject to the tax break promised by Pres. Obama, or whether they had gotten one already. Which I think was a lie, I think she knew, she just didn't want to admit.

Then, when he asked where she was for the last 8 years, she started talking about 1991 and when Pres. Bush 41 took us into Iraq the first time, and said it seemed like we had been at war ever since.

This, THIS is the sleeping giant she threatened Sen. Spector with? 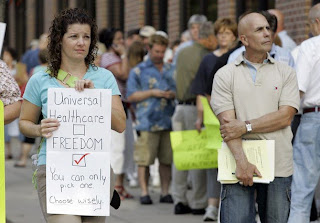 Here is a blog post from a commenter at Think Progress called Zooey, and their take on it.. great piece by the way.. and I had to give them a shout out and link to them.

When he asked her what it was she wanted, she stated she wanted to go back to what the "Founding Fathers" wanted this country to be. These are nothing more than Glenn Beck talking points. So he then challenged her with Medicare and Social Security. That's when she really let her lack of knowledge shine through. But, Lawrence was gentle with her, he didn't belittle her, he didn't berate her as Tweety would have done, he just asked her questions and let her show herself as the true simpleton she was.

She even stated, that she had stayed with friends the night before and they told her she was wrong..but she wouldn't budge from her position. Oh, and just in case you think it is just her.. Here is a picture of her husband from the Town Hall in all his glory.. Just in case you think she is the only backwards one in the family. I just pity the kids.

So, these are the "Sleeping Giants" that are finally awakened, by of all things, Health Care Reform.

They slept through 9-11, the destruction of Habeas Corpus, Afghanistan, lying us into Iraq, Abu Ghraib, Attorney firings, Scandals out the wazoo, the financial collapse, two of the most contentious elections ever, and then the election of the first black President. And it took Health Care Reform to wake these "Sleeping Giants"?

Damn they must sleep soundly. That's all I can say.

Here is the video of Lawrence and her.. and for a bonus.. there is also video of her on Faux News.. lol Just for your viewing pleasure.

Dumber than a box of rocks doesn't begin to cover it.

You got it.. just clueless is my best guess..they have no idea, just listen to what they are told by the people on Fox News and go from there.

but see this is what pisses me off - MSM gave her and her dumbness TONS of attention..what about the people at town meetings asking GOOD questions telling real stories of what they have been through...

larry o took her apart, but he was so gentlemanly about it, she didn't realize it until it was way too late. she's an imbecile. when i listened to her, and she gave that bullshit answer about our always being at war, i was stunned! 9/11 was nothing out of the ordinary? that floored me.