Right in America Around the Bend?

Last week was a banner week for the right side of America. They aren't dealing well with being out of power and having a black man in the White House.

But we knew that, part of that started when they realized he was going to win, way back last year. They attacked everything about him, actually when it became obvious he was a serious candidate and even had a chance of coming in close to second to Hillary. Because, NO ONE could beat Hillary. Especially not a black man named Barack Hussein Obama.

But he did defeat Hillary and then went on to defeat McCain, war hero, POW, and become the 44th President. That's when the heads of the people on the right side of America exploded.

It seemed this week things got just a little more over the top than usual. Maybe it was the loss of two of their rising stars, in Ensign and Sanford, when they both admitted to having affairs, that caused Beck and Limbaugh to go off their rockers just a bit more this week and say some pretty extraordinary things.

Rush was all about hoping for this to happen this week, but not in a good way. Listen to this if you can stand it.

Yeah, that's right, Rush is all for a Coup here in America, for us having an overthrow of the Government and someone violently taking back the country and putting someone else in charge.. Not sure who he wants in there.. Maybe him.. Oh, I got it..

That's why Palin resigned Friday.. He had it all planned out.

Then on July 1, he said this, "This is Barack Obama, who led from the United States Senate his party into doing everything he could to ensure the defeat of the U.S. military. ... This party was doing everything it could to impugn and dishonor the military."

As David Neiwart from Crooks & Liars says and I quote:

This thread of commentary clearly is pushing toward a single thought -- to push people in the armed forces into seeing Obama as a usurper and traitor, just like the Honduran president, and toward the idea that a similar military-based removal of him from office might be justified.

Keep in mind that Limbaugh is only of only four pundits still broadcast daily on Armed Services Radio, so our men and women in uniform are getting fed this garbage on a daily basis. (And Wes Clark was right: It is well past time to take him off.)

Limbaugh in fact is picking up on sentiments already circulating on the right. Larisa Alexandrovna at AtLargely picked up on the chatter going on at various right-wing blogs after Honduras coup, pointing in particular to the Gateway Pundit's commenters, who posted such items as the following: 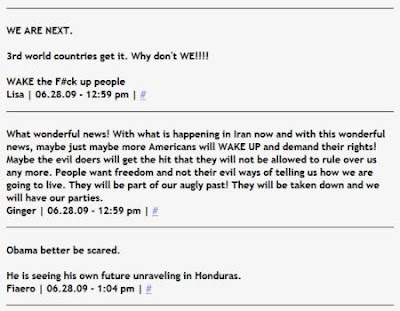 I am sure I missed part of his comments, but you get the gist of it. These are just from 3 days this week, when he was promoting a Coup to overthrow the President.

Next we come to Glenn Beck and his guests. First is Michelle Bachmann. She has been on his show numerous times. Lately her big thing is the census.

Of course she has also been on lately about Cap & Trade or the ACES bill which just passed the House, which Beck used to point out the 8 republicans as Traitors and put up their phone numbers so everyone could call them and threaten them for voting for it.

But the topper for Beck this week was when he had a former CIA agent on with him.. yes, a great America loving, patriotic, former CIA agent named Michael Scheuer. His great claim to fame was he served as the Chief of the Bin Laden Issue Station.

That just makes what he had to say on the show with Beck even more strange. Watch this.

It is actually hard to believe someone would come right out and say they wanted the US to be attacked in order to help us or save us or something. I am not quite sure I get the reasoning behind it. But that's what he said. Like I said, its been a hell of a week for the right side of America. And by right, I sure don't mean the CORRECT.

Jon Stewart took it on and gave his take on it too. At least someone in the "media" is paying attention. You would think something this outrageous would get the attention of someone, but nope, not a soul said a word. So, here is Jon Stewart:

Anyway, these are just a couple of things I have noticed.. I am sure there are more out there, but these caught my eye. Meanwhile, the "MEDIA" is busy giving the Obama Administration trouble about calling on a blogger at a presser, possibly picking questions for the Town Hall on Health Care the President had and we have this nonsense going on and no one says a word.

Matt Osborne did a great write up about the media and their nonsense stories today at his place. You should check it out.

So, let me know what you think, and what stories you have seen, what is making the wingnuts head explode in your neck of the woods?
Posted by Annette at 12:22 AM

You really hit the nail on the heaad with this post. The true colors of these so called "patriots" are coming out and they are a little scary. Not that I think they'll effect a coup, but they encourage dangerous nuts.

Is the Armed Forces radio taxpayer funded? I'm going to write my senators and congressman expressing outrage. The clip you ran bumps up against sedition.

Yes, Armed Forces Radio is taxpayer funded. So, yes every day Rush gets to spew his venom about Pres. Obama to the troops over and over again, and WE PAY FOR IT.

Thanks for compiling all this in one place, Annette. It continues to amaze me that this sort of blathering isn't considered unpatriotic. In fact, it's considered by the right to be just the opposite! See, last time I checked, inciting others to overthrow the government was considered treason. You can bet your little left wing boots that if any of this had been uttered duringt the last administration, there'd be hearings and charges and a huge fuss made all over the place!
Can't wait for Rachel to address some of this nonsense. Word has it that she is out sick today.If she's anything like me she's sick of Michael Jackson!
Great post, Annette. Thanks.

mommapolitico said...
This comment has been removed by a blog administrator.
July 6, 2009 at 5:21 PM

These people are vicious and evil yet I feel badly for them.

When will people start realizing that the vitriol that Rush spews is no longer freedom of speech. It's like yelling 'fire' in a crowded theatre.

I can barely stand listening to Rush for more than a minute. Inciting, encouraging the wingnuts to violence, wishing for another terrorist attack on our country--that fidgit should be locked up for treason!

It was a crazy week for the crazies! They are experiencing a little of what we experienced for 8-yrs but they can't handle it! They really do feel like things are all wrong, so they listen to Rush or Beck and think it might be OK to overthrow their own govt. They are dangerous, and I confess to some fear they will actually act on their inclinations.

In my neck o'da woods, there were tea parties over the weekend! One person was holding a sign, "Don't blame me, I voted for an American". Another one said, "Obama lied, the economy died". Obviously there is no reasoning with these people! Their heads are filled with limbaugh lizard-brained lies.

I think you're spont on with this trend. Hell, it's been latent and dormant within the right ever since Goldwater, and every time the specter of anything that they see as upsetting their precious apple cart rears up they dig in their collective heels and get ready to fight. Of course, up until we had a black president it simply meant trash talking and fighting back politically or verbally on right wing radio, but now it has solidified into a call to arms. Now that the white wing no longer controls anything, and the manifestation of that being a black president, they will stop at nothing to get back what they see as theirs. It's disgusting and quite disturbing.