Where is the Outrage Now? Is this Disrespecting Our Flag? 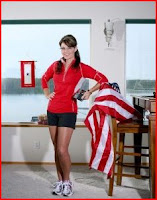 You have to see this from ShowMeProgress, They have decided to take on the Governor from the north, no I mean way north.

It seems she is using the flag as a prop in a photo shoot she did. And it is not very respectful. According to a blurb on MSNBC, and I didn't catch exactly what was said, this is illegal, but it is questionable as to whether it is the photographer or Palin who would be in trouble. Looks like both to me, she should know better, as a government official, but I am not sure. I will update if I hear more later.

The picture in question is one of a series used in the feature article in Runner's World and can be found here.

As you can see from the picture, she is standing next to a bar stool and leaning on a flag. The flag is draped over the stool and not hung like it should be.

Remember during the campaign, all the flack over the flag pin or lack thereof..or the hand over the heart during the playing of the National Anthem, and how that was being less than patriotic..

Now, we have Palin trying to show off her runners physique, all the while demanding everyone take her serious draped over the top of the flag, disrespecting it. Then trying to challenge the President to a race..

Then, after we see this picture of her on the flag, comes this video released by someone in Sarah PAC, then later denied by them.

You tell me.. what are they up to here.. of course this version isn't quite as bad as the first one they came out with. The first version of this video was even more disgusting and demeaning to the President.

This woman who seems to think she is already in a run for higher office, when she can't even take care of the people in her state is failing big time.

She is now potentially facing charges for violating the flag and if she keeps up, she is going to have more than the 18 ethics charges in Alaska against her.

h/t Bob Cesca & Andrew Sullivan
Posted by Annette at 9:13 AM

Ah, Ms. Palin, the very picture of hypocrisy! Thanks for posting this photo. Couldn't get the clip to play, something about "parameters"...but I can just imagine...Great post!

Palin is under the impression that as long as the "flag" is in close proximity - all is well and she is the chosen one. I learned early in life (eons ago) that NOTHING is ever placed UPON the U.S. flag. Maybe they missed the memo in Alaska!!!

the moron has no idea what's in the constitution. why would she have a clue as to what the u.s. code says? i noticed that another pic is of her holding her baby. there's no warmth apparent whatsoever. she has one of her cheesecake smiles and holding the baby as a prop.

Well, a lot's happened since you posted this, as I'm sure you know. News sure does move fast these days. Even on holiday weekends.

As to the flag - you ought to know by now that nothing is unpatriotic when the right wing does it. Not desecrating the flag, not advocating secession from the union. Not even wishing a terrorist attack upon this country. It's all just tough love. What's unpatriotic is wanting every American to have health care. You betcha!