Chuck Hagel Speaks his Mind On Cheney, and Other things 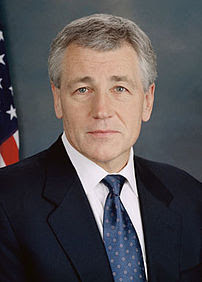 Sen. Chuck Hagel was on Rachel last night and he had a few choice things to say about Russia, Cheney, fellow Republicans and other things. I think he said it better than anyone else could say. I have always thought he was a pretty good man, a fair man and would have been a good choice to help Pres. Obama in any position and I still think he might serve in some way in the cabinet some day.

Listen to what he has to say to Rachel and then think about his answers about Cheney.. it is pretty telling as to what he thinks about the former president and vice president.

It really tells you something about the Republican party that he can't get anywhere in it anymore. He's really very conservative on a lot of issues, but they don't want to know about him because he's somewhat sane. The GOP really has moved into an alternate reality.

I thought Hagel would've been good for Sec Def because he's been there (war) and is not a hawk. I still think Gates will be stepping down in 2010 & maybe Hagel will step up. It's a good fit.

I think he wanted some time off, and you are probably right D.K., when Gates steps down he might join.