This is who we need on MSNBC instead of the Joke 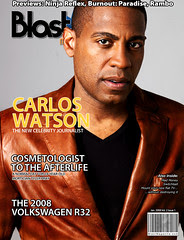 Carlos Watson is a fairly new anchor on MSNBC, but I really like him. He is a good counter to some of the ones they have on during the day. He holds his own with the Joke of the Morning too. He has a new piece up on Huffington Post that is a must read.

I have degrees from Harvard and Stanford, am an anchor on a major network, have a little money in the bank, and I'm young. By all accounts, I should be able to survive this recession. But even my confidence is shaken. We're not in a good place. The reality of the matter is, bad as things are, we all know they're likely to get worse. Much worse--both overseas and in the poorest areas here in the US.

It all comes back to 30-40: Our homes were overvalued 30-40%, our salaries are being cut 30-40% (if we still have them), our portfolios, when they finally rebound, will still be down 30-40%. Like any sane person in his 30s or 40s, I'm starting to wonder the obvious: What will it take to turn things around? One answer is signs--about 6-10 million of the "help wanted" variety. But another part of the solution just came to me last night.

The answer is Rush Limbaugh. Yes, that Rush, the Man from Missouri. Because what he reminded us of in the last few weeks is what will keep most of us down: negativity and mindless carping. Beyond a banking fix or a housing plan, our floundering $12 trillion economy needs a fundamental reset of the public commentator class. And I predict we will see that over the next six months, from YouTube to CNN, Twitter to the site you're reading. I genuinely think America is hungry for practical optimism. I know I am.

This new class of public commentators will be distinguished not by their ability to describe the depths of our pain, but by their capacity for offering clear, compelling, credible visions of how individuals, companies, governments, and groups can move beyond it. They will be people of accomplishment who can help us find practical ways ahead, entrepreneurs and writers who can both build a business and tell a good story. We'll respond to them because they are not hype entertainers, but sharp, clear, relatable visionaries who can help us see how we can truly turn things around in this challenging environment.

I like Suze Orman, but I'm not talking about her. I like Professor Nouriel Roubini, but I'm not talking about him. I'm picturing Steve Jobs and Lou Gerstner--imagine those two on a split-screen breaking down the economy. Think I'm joking? Then you're forgetting the outsized role that J.P. Morgan (the man, not his bank) played following the panic of 1907, or the role that the "new" Southern Governors played after the tumultuous 1960s, or the role that John Steinbeck played as we came out of the Depression. We need help turning the page. We need a dramatic revolution in our public commentators. We need Buddy Fletcher, Arte Moreno, Sheryl Sandberg, and others to become the next chattering class.

Who would you like to see on the airwaves? Let me know at twitter.com/carloswatson.

So, now is your chance.. let him know who you want to see on your TeeVee Machine.. I did.. I told him I would rather see him than the Joke of the Morning...lol

Joe Scarborough is a JOKE. He has an opinion about everything, and always seems to think he is right. Instead of being impartial, he pushes republican talking points. What he should be talking about is the dead intern found in his DC office, and why he is still not in Congress. He brings out that awful Pat Buchanan, who never has anything positive to say about President Obama,minorities, or people of color. Scarborough's entire show is just a platform for him to offer his unsubstantiated talking points. I used to try to watch him in the morning while I got ready to go to work, but had to stop. He is insufferable and acts like a spoiled, rich frat boy.

you are right - he is good....on his feet- knows what to say and how to analyze news....and he is smart....finally someone with commonsense during the day...phew....