Debbie Wasserman Schulz is One Tough Lady, We Need To Watch Her 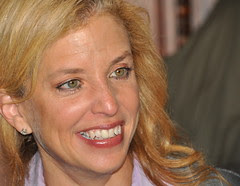 Debbie Wasserman Schulz is one lady we really need to watch, I have said this before and I will say it again, she is tough, smart, and is a powerhouse. Today she revealed that for the last year she has been battling breast cancer, all the while campaigning first for Hillary Clinton, then for Barack Obama. She made numerous TeeVee appearances, rally appearances and still took care of her congressional duties, 3 children and her surgeries.

From the Miami Herald comes this story today.

In the past year, she underwent seven major surgeries, including a double mastectomy and reconstructive surgery, while balancing motherhood, Congress and her roles as a chief fundraiser for House Democrats and a political surrogate, first for Hillary Clinton and then for Barack Obama.

''I had a lot going on last year,'' she said with a laugh, sitting in the living room of the Capitol Hill town house she shares with two other members of Congress when she's in Washington. ``I'm a very focused, methodical person, and I wasn't going to let this beat me. I wasn't going to let it interfere with my life.''

Boy, I'll say she had a lot going on, and I don't think anyone ever had a clue. She was such a powerful voice for first Hillary and then Barack Obama. I remember seeing her on Hardball and at other times and she always was on message and had her arguments down pat.

She said she decided to keep her cancer private, concerned mostly that her young children (then 8-year-old twins and a 4-year-old daughter) would worry, particularly with a mother who was also constantly on the go. They knew she was undergoing surgery, but she didn't tell them the cause.

'I knew from my doctors that if I went through their recommended course of treatment that I would get through it and I'd be fine, that I could come out the other side and confidently tell my children, `Mommy's fine,' '' she said. She planned to tell them Saturday night.

She scheduled her treatment at Walter Reed Army Medical Center and the National Naval Medical Center in Bethesda, Md., during congressional recesses so she wouldn't miss votes in Congress.

Wasserman Shultz is one of the most influential Democratic House members from Florida. She was easily re-elected to her third term in November and is vice chair of the Democratic National Committee.

She said that keeping her illness to a small circle of family members and friends allowed her to ''maintain control'' over a situation that was otherwise out of control.

''I didn't want it to define me,'' she said. 'I didn't want when you wrote a story about me, I would become `Debbie Wasserman Schultz, who is battling breast cancer.' I didn't want that to be my name because I knew I was going to be fine.

That sure says a lot about her to me. The article also says because she was at risk for Ovarian cancer she also had her ovaries removed. Like I said what a powerhouse and what a strong lady. To do all this and still run for re-election, be a voice for others, and collect money for the Democratic party, do her congressional duties, be a wife, and a mother of 3 young children. WOW..

These are the kind of leaders we need to keep around. The ones who really do put their Country and other first and not just as a slogan as we see so many times.

thank you for writing this...and letting us know - what an amazing lady...she is definitely someone to watch....and admire....we need more people like her....

Wow! Give that woman a Superwoman cape!

I had no idea. She was on TV, on the important issues so much. I have no idea how she managed all that. She is amazing.

from the way she has handled herself you would never know

you go Deb - and you get well

I love Congresswoman Wasserman Schultz. I met her one day on Capitol Hill. It made my month!

What I always like about her interviews is how she never lets the opposition get away with anything. She listens & responds & really knows every issue.

Yup, she is tough and I had no clue she was ever ill. Her children are so lucky. What an inspiration!