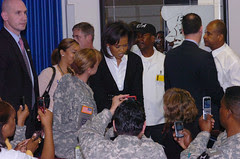 Michelle travels to Fort Bragg to visit with families of military. This is from an AOL report. Just WOW.. She really impresses me with what she says and does. Hitting the right tone and notes every time. Bringing out the problems, and pointing out things we could all do to help.

FORT BRAGG, N.C. -First lady Michelle Obama, venturing away from Washington to define her White House role, called on the American people Thursday to embrace the military families in their communities.
In her first major advocacy mission, the wife of President Barack Obama spent the afternoon visiting with soldiers and their families at North Carolina's sprawling Fort Bragg. She then told a crowd of community leaders in nearby Fayetteville that Americans need to reach out to members of the military.
"Our soldiers and their families have done their duty — and they do it without complaint," Mrs. Obama said. "And we as a grateful nation must do ours — do everything in our power to honor them by supporting them."
Mrs. Obama has said she wants to focus on military families during her time as first lady. She spent time hugging military members at a dining facility and talking with their spouses in a private session — all in a support center that had some windows boarded up with plywood.
Later she visited a classroom of kids, ages 3 to 5, at a Fort Bragg child development center. She gave an animated reading of "The Cat in the Hat" — a book she used to read to her daughters — and then did a few minutes of crafts with kids preparing "Thank You" cards for wounded soldiers.
"Military family members have their own special courage and strength," she said later.
To emphasize her commitment to the military community, Mrs. Obama also gave her first network television interview since her husband took office, sitting down at Fort Bragg with ABC's "Good Morning America."
In the interview, to be broadcast Friday, she said she wanted military families to know they have a friend in the White House.
"It hurts. It hurts," the first lady said of hearing about military families on food stamps. "These are people who are willing to send their loved ones off to, perhaps, give their lives — the ultimate sacrifice. But yet, they're living back at home on food stamps. It's not right, and it's not where we should be as a nation."
ABC released excerpt of the interview late Thursday.
"I think that's one of my jobs, is to try and shed some light on some of these issues," she told ABC, "to not just be in that conversation with military spouses and hear those stories, but to take that information back to the administration to share it with the nation, so that we can think again about how we can better support these families."
In her speech, Mrs. Obama that military members aren't just confined to bases and the surrounding community, noting that the families of National Guard and Army Reserve personnel are struggling to cope in all parts of the country.
"I encourage everyone out there, within the sound of my voice, to reach out on your own — through schools, PTA, Little L agues, churches, workplaces — and find out if there's a soldier or a soldier's family right there in the community who needs a little extra support," Mrs. Obama said in her speech. "They're there. Something as simple as offering help with car pool duty can make the world of difference to a parent who's trying to hold the family together during a very stressful time."
Sgt. 1st Class Ashlyn Lewis, 31, of Indianapolis, said it was a remarkable experience to see the first lady in the cafeteria at Fort Bragg. She said the Obamas have a lot of work ahead of them to shore up deficiencies in the military's medical system.
"Right now the biggest concern would be taking care of the vets, making sure that the people that are coming home are getting the proper medical care — not just for the Iraqi or Afghanistan vets, but also, there are a lot of Vietnam vets who haven't been receiving the proper care," Lewis said. The Obamas are "headed in the right direction," Lewis added, "but it's going to be a lot of work."

I believe this women will be the understated blessing to many during this administration. Regarding "understated", I don't believe she'd have it any other way. She's a true class act that will find a way to be involved.
Nice post!