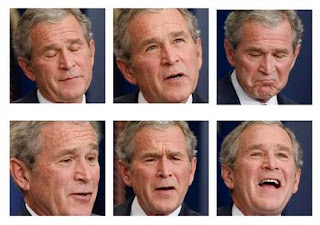 President Bush gave his Exit Presser Monday, January 12, 2009. In doing so he gave his accounting of his take on his term, and how it looked from his perspective. He had much to say, some good, some bad, some angry, some just plain dumb.

I want to look at some of the things he said, and then point out the truth, now I didn't do all of this, I had some help. But some of them I did do. I also want to put in a picture of his faces during the presser I think is pretty funny.

President George W. Bush claimed to have inherited a recession that in fact began on his watch in a legacy-polishing news conference Monday often at odds with his record. A look at some of the president's claims in his final news conference, and the facts:

BUSH: "In terms of the economy - look, I inherited a recession, I'm ending on a recession. In the meantime, there were 52 months of uninterrupted job growth."

THE FACTS: There have been two recessions during Bush's time in office. The first was a relatively mild downturn that began in March 2001 and lasted eight months, ending in November 2001. Since the first one did not begin until after he took office in January 2001, it is not strictly accurate to say he "inherited" it.
The second downturn began December 2007 and has already lasted longer than any recession in a quarter century. If it does not end until the second half of this year, which many economists believe is likely, the current recession will have surpassed in length all other downturns of the post World War II period.
As to his claim of 52 months of uninterrupted job growth, that is factual, although perhaps misleading in what it says about overall job growth during his term. Job growth after the 2001 recession did not resume on a sustained basis until September 2003, continuing until January 2007, a period of 52 months.
However, jobs have declined in every month since then. A staggering 2.6 million jobs disappeared in 2008, the most since World War II, and unemployment hit a 16-year high of 7.2 percent in December.
Overall, during Bush's eight years in office, a net total of 3 million jobs were created. In the two terms of his predecessor, President Clinton, roughly 21 million jobs were generated.
---
In a side note to this, here is a link to a story that was done by Rachel Maddow, and by Anderson Cooper,(who was there, on the ground every day in the water) and he has a different memory than Bush does too.

Also check out my friend Enigma4Ever @ Watergate Summer she has a lot of stuff on Katrina. It is something her and I discuss and she has blogged on it. Bush is such a jerk for saying these things when he knows it is just an out and out LIE..and yes I said it was a LIE!!!!!!!!!!

THE FACTS: The president's defense is based on one very narrow measure in the 2005 storm's immediate aftermath. He ignored numerous other facets that depict a more sober picture.
There were 9,000 Louisiana families still living in trailers as of last Sept. 1, and more than 30,000 residents of Gulf states receiving disaster housing assistance. Five of 23 acute-care hospitals in the New Orleans area remain closed. The city's bus system carries less than a third of its pre-storm passengers. Many neighborhoods remain largely vacant.
Bush noted that $121 billion in federal aid was approved. But much of that went to rescue operations and other short-term needs. The Louisiana Recovery Authority estimates that about $15 billion has been spent on rebuilding in the state.
Bush said New Orleans schools have improved, which is true. But of 125 public schools in New Orleans before Katrina, only about 85 remain.
---
BUSH: Predicted that Israel and the Palestinians will eventually make peace more or less on terms he outlined early in his tenure, and said his administration "worked hard" to advance peace by defining a goal of two peaceful countries and working to strengthen Palestinian security forces.

THE FACTS: Bush's 2002 speech calling for an independent Palestinian state alongside Israel did mark a surprisingly explicit and detailed endorsement of that idea by an American president. But he didn't mention that in those early years his administration put active peacemaking in a deep freeze and only tried to restart negotiations late in his term. In the years between, Israel expanded Jewish settlements on land claimed by the Palestinians for an eventual state, with only mild complaint from the United States.
Secretary of State Condoleezza Rice has said the administration waited until the timing was better, meaning until after the death of Palestinian leader Yasser Arafat and the election of a moderate leader to succeed him. Bush wrote off Arafat early on, with advisers saying the PLO chief was corrupt and probably incapable of delivering a deal that Israel and its U.S. backers could live with.
But by the time the U.S. made Mideast peace a diplomatic priority conditions were changing again. Bush pushed Arafat's successor, Mahmoud Abbas, to hold elections in early 2006 that he feared, correctly, would legitimize his rivals in the Islamic Hamas movement. Those rivals are now in control of the Gaza Strip, splitting the territory and people Abbas theoretically governs.
Bush sponsored a high-level peace conference in late 2007, and visited Israel and the West Bank in early 2008. Rice stopped by often to check on secret negotiations between Abbas' West Bank leadership and Israel.
Hamas is now at war with Israel in Gaza, in the most intense fighting in years. Israel may succeed in wounding Hamas leadership and its ability to fire rockets into Israel, but it probably cannot defeat the well-organized group outright. In the meantime, civilian deaths in Gaza erode Palestinian support for negotiations.

Now that we have fact checked some of Bush's statements of his pressers and you can see that he wasn't quite on the mark, I am sure you have others you can add. Feel free.

One other little thing he had to say I found odd... The president declined to talk about any plans to issue further pardons, but he did talk about what he'd do after Obama takes over, saying he'd likely start working again immediately. "I'm a type-A personality. I just can't envision myself [with] the big straw hat and Hawaiian shirt sitting on some beach," Bush said. "Particularly since I quit drinking."

I sure hope he doesn't issue any more pardons, I worry he will issue a blanket pardon for himself and Cheney before he leaves office. But I wonder about the quitting drinking part. Sometimes I think that's the only thing that explains some of his behavior.
Posted by Annette at 7:14 AM

Annette, I see you at Enigma's so thought I'd drop by. I don't know how I missed Bush saying he's a TYPE A personality. He is the opposite! He took more vacations during his presidency than anyone else. He never misses his early bedtime, never heard of burning the midnight oil. His staff has been given orders not to disturb him early in the morning either, unless it's a nuclear war. Essential presidential executive reading material has to be kept to one-page or he sends it back. He's the WHAT ME WORRY president delegating all details for others to worry about. No wonder he's hardly aged in office (after 8-yrs most presidents look significantly older). All this and more indicate a very casual person, one who does not care to examine too deeply, not a TYPE A controlling ambition-driven fingers-in-every-pie personality type. I think he was just tired of admitting he was a "C" student & decided to award himself an "A". Dumkopf!