Happy 85th Birthday Dad, I Sure Miss You! 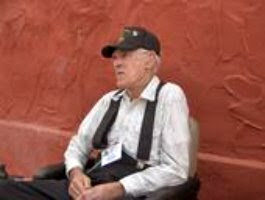 Today would have been my dad's 85th birthday. How I miss him. He's been gone just over a year now.

I was busy all day today, thank goodness. If I hadn't been I am not sure I could have handled it.

Dad is the reason I started this blog. He was so upset over the mess BushCo left us in, and so angry over the torture and the war. He hated what was done.

Dad fought in WWII in Europe and was one of the Liberators. He freed some of the Jews from the death camps and what he saw haunted him for the rest of his life.

He also fought and finally won his 100% service connected disability, but only 4 years, 10 months before he died. Sixty years after he got out of the military, he finally got what he was promised. Well most of it anyway.

Dad worked hard and probably took less than 2 weeks sick leave his entire life. Even with a heart condition, he seldom missed a days work. One morning he told Mom he wasn't feeling well, but he still went to work. Next thing we knew, the hospital called to tell us he had driven himself to the ER. We later found he had to stop 3 times in 15 miles, with chest pains from the heart attack he was having.

That was my dad. 3 days in the hospital and he was back to work in less than a week.

Dad had prostate cancer. It metastasized to his bones, mostly in his hips and spine. He seldom complained about pain. Even though the doctors told us he had 18 months to 24 months it was only 6 months from the time they told us until dad was gone.

I miss my dad so much. I guess I thought he would always be here, even while I knew he wouldn't be. He was just always there, and now he isn't.

Happy Birthday Dad, I miss you and I love you.
Posted by Annette at 10:33 PM

Labels: Happy Birthday Dad, I Love You, I miss you

I know how you feel. My mom's been gone for three years now and I still miss her. Still, you're lucky to have had him as long as you did. My father died in '82, unexpectedly. I would love for him to have known his grandson as he grew up and now. There is so much they'd have had to talk about.

My dad passed away in 2001--same generation. They don't make them like that anymore. It was a touching tribute.

when the phrase the greatest generation was coined, it was meant for people like your dad. your post was a lovely way to celebrate his birthday and his life.

Awww nice tribute to your Dad. Sounds like he was a fine man who made it through lots of obstacles, with a good attitude.