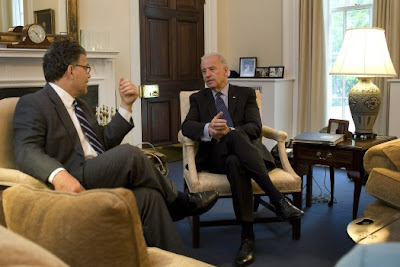 "The President and I look forward to working with Mr. Franken"

"The election process and recount in Minnesota have lived up to the state's reputation for organization, transparency, and bipartisanship. The officials have been meticulous and every ruling has been unanimous.

"While Senator Amy Klobuchar is one of the hardest working members of the United States Senate, Minnesotans deserve their full representation.

"Once the Minnesota Supreme Court has issued its final ruling in this case, the President and I look forward to working with Mr. Franken on building an economy for the 21st century."

How neat, and I only wish it were today. This has gone on long enough. We need Al in the Congress to get the work done. Amy Klobuchar has worked her tail off by herself and done a bang up job of it, but it is time, past time for her to have help representing the people in her state.

Thanks Al, for being the guy you are and keeping your cool in all this mess and staying above the fray. You have shown that you are a true statesman.
Posted by Annette at 6:34 PM

Just imagine if the shoe was on the other foot and Colemann was an incumbent Democrat challenging a Republican who had the majority of votes...sheeeeiiiit.

I really think when this is over I'm going to miss the Franken - Coleman race. It seems like an institution by now.

This is crazy-- even the contentious presidential election of 2000 did not drag on this long.
Coleman just comes across as being a sore loser.

Coleman probably can't concede until Rush tells him to.